Safe From the Fires 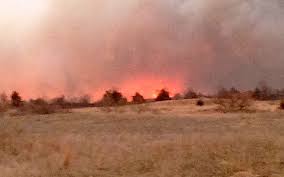 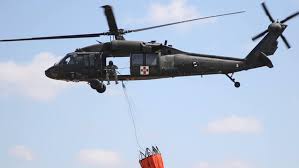 We are hoping the worst is over!! The fires were about 7 miles from our house but the winds were gusting up to 45 miles an hour so the entire city was in danger. The fires were out of control! Brave firefighters from all over the United States have been fighting around the clock to save this area of my town. So far there have been more than 6500 acres burned. The first damages are starting to roll in. Eight houses were completely burned. One of the homes is the principal of Harley's high school! The next to the last picture is what we could see of the bright glow in the night sky from our front yard. And we had the Black Hawk helicopter with their huge water baskets flying over our roof all day the past two days!

Our neighborhood was 1 block south of the evacuation area. We had a family of six (and their two dogs, one the size of a small Shetland pony) stay with us for over 24 hours as their house was about 4 blocks into the evacuation zone. They have returned to their home now. The evacuation zone has now moved a bit further away from both our homes. Thank you Lord!

As well as several other states and more counties in Kansas these fires have been the story of our lives for several days. I don't think I have ever had to imagine what it would be like to lose everything I have in this manner. This has certainly brought it closer to home. The inside window sills of my home were covered in a fine black soot! And this is what I found yesterday in a laundry basket sitting in the dining room.

At one time on our phones (there were 5 smart phones in the house) an emergency alert sounded with the following message: 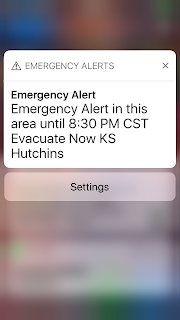 It was immediately determined to be accidentally sent to all of Hutchinson and was not meant for the entire city to evacuate. But, let me tell you, this will send your heart into panic mode thinking, "oh dear Lord, help us now!!"

For now, we are safe and recovering. I am going to revel in the quiet house! Harley and I might take in a little shopping this afternoon.