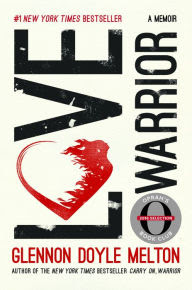 Below is the review written on Barnes and Noble. Mine will follow!

Just when Glennon Doyle Melton was beginning to feel she had it all figured out—three happy children, a doting spouse, and a writing career so successful that her first book catapulted to the top of the New York Times bestseller list—her husband revealed his infidelity and she was forced to realize that nothing was as it seemed. A recovering alcoholic and bulimic, Glennon found that rock bottom was a familiar place. In the midst of crisis, she knew to hold on to what she discovered in recovery: that her deepest pain has always held within it an invitation to a richer life.

Love Warrior is the story of one marriage, but it is also the story of the healing that is possible for any of us when we refuse to settle for good enough and begin to face pain and love head-on. This astonishing memoir reveals how our ideals of masculinity and femininity can make it impossible for a man and a woman to truly know one another - and it captures the beauty that unfolds when one couple commits to unlearning everything they've been taught so that they can finally, after thirteen years of marriage, commit to living true—true to themselves and to each other.
Love Warrior is a gorgeous and inspiring account of how we are born to be warriors: strong, powerful, and brave; able to confront the pain and claim the love that exists for us all. This chronicle of a beautiful, brutal journey speaks to anyone who yearns for deeper, truer relationships and a more abundant, authentic life.

I read this book as the February book selection for the on-line book club I joined. These kinds of books are usually not my cup of tea. This book was hard to read. I always wonder what makes a book a best seller. I think maybe it is because so many people will relate to what the author has to say. I did not read her first book Carry On, Warrior I don't know that I will either.

This book shows Glennon at what she calls rock bottom. She is struggling with recovery from addictions: alcoholism and bulimia. She has married the man that she was with during those times. Never a good idea, in my opinion. She had become pregnant at the times of these addictions. They chose to have an abortion. And  when she became pregnant the second time she and Craig married. Already off to what I would call a 'rock bottom' start. After she had three kids and a "what she thought" a stable marriage she discovers that Craig has cheated on her with 'real' women and pornography. This book is about how she finds herself and heals her marriage. In the end of the book they find 'happiness'.

But they don't really! Just before I read the last few pages of the book I discovered that not only do they end the marriage (just as the book comes out) but she decides to announce to the world she is in love with soccer star Abby Wombach. What disturbs me about this is not the fact she is "gay" (although I question it) but the fact that she announced on her blog in August of 2016 she and Craig were separating and she announced in February 2017 that she and Abby were engaged. WHAT??? I say we haven't heard the last from this author on how messed up she is! I just don't think I care to read about it anymore.

My hope for the future of this world is for people to figure out who they are before they bring kids into the world. It's really not that hard. Kids are a privilege, not a right. I can only wonder what pain and suffering is brought to children who wonder if they really know who their parents are. And if the parents don't know who they are how can they lead children through some of the most difficult years of their lives.

I will step off my soapbox now. Keep your comments and responses nice and respectful. Because I am just keeping my blog honest and real.
Posted by Paula at 1:56 PM