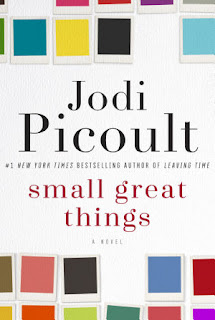 Review below is from Goodreads


Ruth Jefferson is a labor and delivery nurse at a Connecticut hospital with more than twenty years' experience. During her shift, Ruth begins a routine checkup on a newborn, only to be told a few minutes later that she's been reassigned to another patient. The parents are white supremacists and don't want Ruth, who is African American, to touch their child. The hospital complies with their request, but the next day, the baby goes into cardiac distress while Ruth is alone in the nursery. Does she obey orders or does she intervene?

Ruth hesitates before performing CPR and, as a result, is charged with a serious crime. Kennedy McQuarrie, a white public defender, takes her case but gives unexpected advice: Kennedy insists that mentioning race in the courtroom is not a winning strategy. Conflicted by Kennedy's counsel, Ruth tries to keep life as normal as possible for her family—especially her teenage son—as the case becomes a media sensation. As the trial moves forward, Ruth and Kennedy must gain each other's trust, and come to see that what they've been taught their whole lives about others—and themselves—might be wrong.

With incredible empathy, intelligence, and candor, Jodi Picoult tackles race, privilege, prejudice, justice, and compassion—and doesn't offer easy answers. Small Great Things is a remarkable achievement from a writer at the top of her game.


I love Jodi Picoult books! She truly writes her stories based on so many of the social issues  we face in today's times. This book was no different. It is the story of a black nurse not being allowed to care for the white baby of a white supremacist.

When I was working at the hospital, many years ago, we had something similar to this happen. No a baby didn't die. In fact no one died. That I know of anyway. But there was the case of a black nurse being told she could not take care of a white patient. I was filling in as a float nurse in the intensive care unit. We had a very belligerent, verbally abusive white guy as a patient. On the day shift there was one black nurse. (Our hospital employed very few black nurses. I often wondered about that but I never asked why)This black nurse had been assigned two patients. One of them was the white guy mentioned above. As soon as she stepped into his room he began throwing a huge fit. He wanted to see a supervisor. A white supervisor. His words, not mine. After the supervisor calmed him down word was passed on, verbally, that only white nurses would be allowed to care for him. I worked the night shift so none of this was witnessed by me personally. Just passed on during report. We didn't have any black nurses on my shift so it didn't become an issue for us. We did talk about it among ourselves.No one really wanted to take care of the guy because he was so obnoxious! I took the side of the patient,however,  saying he had the right to have whoever he wanted to take care of him. The same stance I took with male nurses verses female nurses. We had many patients who didn't want male nurses taking care of them. (Once, while I was hospitalized, I had a male nurse. But when I need assistance to use the bedside commode I requested a female nurse help me). I wonder if that is the same thing. Not racist maybe. But sexist.

After listening to this book I am now pondering the stance the hospital took with this patient. Both in the book and at my very own place of employment. Do patients have the right to request?? I believe they do. But I think it is the responsibility of everyone to try to stick up for each other. I just don't know how to do that!

This book gives one a lot to chew on! I give it a solid ***** five stars. I think the ending of the book (which I won't give away) was very idealistic and likely wouldn't really happen. But I like how it ended.  I loved this book! But I sure don't have the answers to my own questions. I wonder if we will still be asking these questions for years to come!
Posted by Paula at 2:51 PM