The Things We Wish Were True-A Book Review 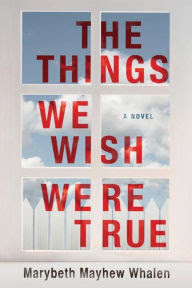 In an idyllic small-town neighborhood, a near tragedy triggers a series of dark revelations.
From the outside, Sycamore Glen, North Carolina, might look like the perfect all-American neighborhood. But behind the white picket fences lies a web of secrets that reach from house to house.
Up and down the streets, neighbors quietly bear the weight of their own pasts—until an accident at the community pool upsets the delicate equilibrium. And when tragic circumstances compel a woman to return to Sycamore Glen after years of self-imposed banishment, the tangle of the neighbors’ intertwined lives begins to unravel.
During the course of a sweltering summer, long-buried secrets are revealed, and the neighbors learn that it’s impossible to really know those closest to us. But is it impossible to love and forgive them?

Every day, in my e-mail, I get a notice from Modern Mrs. Darcy about the Kindle book deals which often include an audio deal. This book was one of those deals. I won't pay full price for an audio book. They are just too expensive. But I don't mind when they are $2.99 or $3.99. I have a Nook Color but I use the Kindle app on my phone so that is where I download these books.

This book was a good story about a small neighborhood where everyone knows everyones business. Or, they think they do. The story begins on Memorial Day Weekend in 2014. The neighborhood gathers at the local neighborhood pool on opening day but the gate entrance is covered with a large spider web housing a huge yellow and black spider. No one wants to tear down the web and enter the pool area. Finally one of the lifeguards removes the spider, lets it go, and tears down the web. The story begins. There are many people caught in a web of lies that will be uncovered as the summer continues.
The story is told through the eyes of the each main character in the neighborhood. One of these characters is a young girl, whose life changes because of an incident at the pool. The remainder of the characters are adults who have been running from secrets in their past. All will be unraveled by the end of the story. And the story ends with all the 'happily-ever-after' one can want.