Just Mercy A Story of Justice and Redemption-A Book Review 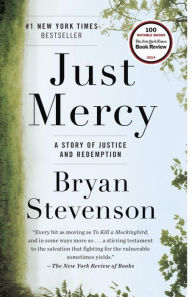 
A powerful true story about the potential for mercy to redeem us, and a clarion call to fix our broken system of justice—from one of the most brilliant and influential lawyers of our time

Bryan Stevenson was a young lawyer when he founded the Equal Justice Initiative, a legal practice dedicated to defending those most desperate and in need: the poor, the wrongly condemned, and women and children trapped in the farthest reaches of our criminal justice system. One of his first cases was that of Walter McMillian, a young man who was sentenced to die for a notorious murder he insisted he didn’t commit. The case drew Bryan into a tangle of conspiracy, political machination, and legal brinksmanship—and transformed his understanding of mercy and justice forever.

Just Mercy is at once an unforgettable account of an idealistic, gifted young lawyer’s coming of age, a moving window into the lives of those he has defended, and an inspiring argument for compassion in the pursuit of true justice.


"Each of us is worth more than the worst thing we have ever done."

Most of this story revolves around the plight of one man: Walter McMillan. Walter lived in the home town of Harper Lee. Walter was a black man with a white girlfriend. He was framed for the murder of a clerk in a  dry cleaner store. The sheriff and the DA manufactured evidence and bribed witnesses to help send Walter to death row. For a crime he did not commit. There was even evidence of exactly where he was when the murder was committed but it wasn't allowed into the courtroom. This man was held on death row for 6 years before the author, Bryan Stevenson, was able to exonerate him.

This author is also a champion of the mentally ill and children who are sentenced to death or life in prison.  I did not realize how many of this country's kids are serving time in prison. I do not know what the answer is to the problems of justice in our country. It is true that rich people are given a much better chance of proving their innocence when charged with a crime. "We must reform a system that continues to treat people better if they are rich and guilty than if they are poor and innocent."

Here in my hometown of Hutchinson, Kansas, we just completed the trial of a young, middle-class, white, teenager, who at the age of 14 set the family home on fire and killed his mother and sister. His father managed to escape. There was no evidence shown of him having been abused or mistreated at home. He was a normal child. He wasn't bullied at school. He wasn't mistreated at home. It took 3 years before the case finally went to court. He was found guilty of two counts of first degree murder, two counts of felony murder, one count of attempted murder, and one count of aggravated arson. He was tried as an adult. If Byran Stevenson were to help this teenage boy he would not want this child to be sentenced to life in prison without parole. He finds that kind of punishment as "cruel". This young man will be sentenced later this month.

So while I enjoyed reading the book (if that is the right choice of words) it also provoked in me a lot of thoughts about crime and justice. I don't have the answers. I don't know what should happen to Sam Vonachen (the young teen who burned his house down and killed his mom and sister). I'm glad I don't have to make that decision. But, I do feel he should be punished. And punished in such a manner that he will be unable to kill another person in his lifetime.

What are your thoughts on capital punishment? What about kids? Should they be put to death for their crimes or spend life in prison without parole? Or is there a number of years that are appropriate??

Email ThisBlogThis!Share to TwitterShare to FacebookShare to Pinterest
Labels: book