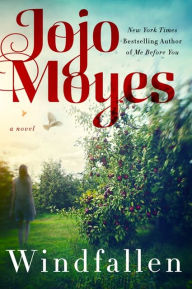 From the #1 New York Times bestselling author of Me Before You (now a major motion picture) comes a breathtaking drama of two women whose lives entwine through a lovely English seaside house
For Lottie Swift, Arcadia has always been magical. The breathtaking art deco house perched above the shoreline of the well-ordered village of Merham seems to stand still throughout the years. It has never changed, not really, but Lottie's fate and fortune have been inextricably linked with those of the beautiful house, and it will forever be fixed in her mind as a symbol of adventure, youth, and loves lost and gained. Even as her life—and the house—falls into disrepair.
Years later another young woman comes to Merham. A designer hired to make over the now-empty Arcadia, Daisy Parsons seeks a new beginning, as Lottie once did. Fleeing a broken relationship and now facing being a single mother, Daisy finds refuge in the house, and something more—a love she thought she would never know again and a friendship unlike any she's experienced before.

(After my rant yesterday about cops and shootings I am back with a book review. Thank you everyone who has my back and says prayers for my beloved cop son. Our country is in turmoil. I think we need prayers for everyone)

This is one of those books you must read slowly. Or maybe read it twice. You need to taste the twists of this story and savor it's depths. In the first part of the book we meet Lottie, a teenage girl who is living with a well-to-do doctor's family in the seaside village of Merham. Her she meets a group of artists who are living in a house known as Arcadia.  She falls in love with the boyfriend of her best friend. She is ready to run away with her love when the girlfriend tells her she is pregnant with his baby. Lottie leaves England and makes her way to live with one of the artist who has left Arcadia and resides in Paris.

Next part of the story we meet Daisy. Daisy is a designer who has been hired to re-decorate Arcadia many, many years later. She is hired by Jones, the new owner of Arcadia. She moves there after being left by her boyfriend, the father of her new baby. At Arcadia she meets up with Lottie, now an elderly woman and mother to Camille who we learn is the 'love child' of her best friend's boyfriend. No one knows who the father is except for Joe, Lottie's husband.

The story tells of lost loves and new found love. Of why not going "for it" might leave you with a bitter life. And how even in the end all things can work out for the best. A good read. I give it a solid ****. I might even read it again someday. Just to savor the story even more.