Gone With the Wind-A Book Review 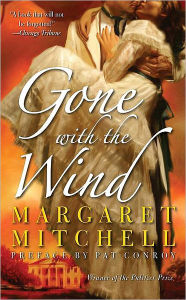 Margaret Mitchell's epic novel of love and war won the Pulitzer Prize and went on to give rise to two authorized sequels and one of the most popular and celebrated movies of all time.
Many novels have been written about the Civil War and its aftermath. None take us into the burning fields and cities of the American South as Gone With the Wind does, creating haunting scenes and thrilling portraits of characters so vivid that we remember their words and feel their fear and hunger for the rest of our lives.
In the two main characters, the white-shouldered, irresistible Scarlett and the flashy, contemptuous Rhett, Margaret Mitchell not only conveyed a timeless story of survival under the harshest of circumstances, she also created two of the most famous lovers in the English-speaking world since Romeo and Juliet.

What a ride! An 1100 page epic tale which I think could have been told in fewer words. Would it have been the same? I'm sure it would have. Margaret Mitchell wrote with such flourishing phrases and descriptions so that I felt I were right there in Atlanta, as the city was burned and pillaged by the Yankees! I could almost feel the pain from the blistered hands of Miss Scarlett. I know I tasted the salt of her tears more than once.

I have known about this story my entire life. My mom used to talk about the movie. She was a mere girl of 15 or 16 when the movie was released. She said her mother would not let her go to the 'picture show' to see this movie because it was so "trashy". Too much violence and sex for such a young girl. Almost sounds like they were still living in the times of Scarlett O'Hara, doesn't it?

And the many, many, many times it has been on TV,I have never watched the movie. Never had a desire. I thought I knew the story. And I have never been a great fan of "love stories". Boy was I surprised to learn this was much more than a love story!

There were times I hated Scarlett and times I loved her. She definitely was not the quintessential Southern lady.  She was a strong-willed and able-bodied woman who did not let the fact she was a woman stop her from saving her family and Tara, the family's plantation. She did all the things a man of those times would have done. But she was a woman! And this was looked down on by her society back then.

Then there was Rhett Butler. He was everything a Southern gentleman was not! He was greedy, cunning, and had no scruples. No one liked Rhett Butler for most of the story. He was wealthy and handsome and a cad! Everything Scarlett wanted, yet, she longed for Ashley Wilkes. Ashley , a Southern gentleman who was married to Melanie. The story takes place in Georgia during the years of the Civil War and the times as the city became reconstructed. Hard times!

I enjoyed the book. I felt this story told of another side of the slavery issue. Here we learned that the slaves were loved and cared for by their owners. And many of the slaves had a loyalty and love for their masters which made them part of the family. We have always seen the stories of the beatings and the hangings. The horrible side of slavery. Little of that was pictured in the book. These slaves loved, even adored, their masters. But, then, the story is told from the perspective of a plantation owner.

The ending of the book was a huge surprise and very sad. (I won't give it away here just in case there is one other person who might not know the story. Although, I doubt there is.) It is enough to say that Scarlett waited so long to profess her love to Rhett that he just no longer "gave a damn". But, as we all know Scarlett will not think about it now. For tomorrow is another day.

This will be a book I won't quickly forget. I give it a strong four stars****!