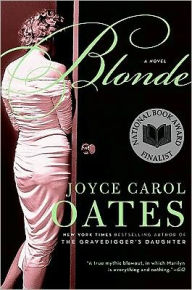 One of America’s most acclaimed novelists boldly re-imagines one of America’s most enduring icons in Blonde—the National Book Award-nominated bestseller by Joyce Carol Oates. The legend of Marilyn Monroe—aka Norma Jeane Baker—comes provocatively alive in this powerful tale of Hollywood myth and heartbreaking reality. Marilyn Monroe lives—reborn to tell her untold history; her story of a star created to shine brightest in the Hollywood firmament before her fall to earth. Blonde is a dazzling fictional portrait of the intricate inner life of the idolized and desired movie star as only the inimitable Joyce Carol Oates could paint it.

I did not read this book. I listened to the audio version. (does that count towards books read?) After I finished the story, I found out that this audio version is an abridged edition. That means it is shortened. Dang!! I don't know that I will get out the book and read it. I, now, know a lot of the story. And the book is over 900 pages. I just don't think I can do another huge book right now! Maybe later.

Anyway, this is fiction based on truth. Joyce Carol Oates wrote a fascinating story based on what we all knew about Marilyn Monroe. The story is sad. Norma Jean had so much to live for, yet, she chose to live loosely and dangerously. I think she was taken advantage of by many people. Because she was beautiful.

The book (and this audio version) tracks her life from childhood until death. She is portrayed in a good light and in a bad light. In the end we get to decide. All Norma Jean (or Marilyn Monroe) really wanted was to be loved by someone. She tried to get the love from her mentally ill mother, from a father she never knew, and from all 3 of her husbands. She wanted the public to love her, the studio to love her, everyone to love her. And she died trying to get love from someone!! Anyone!!