Fighting a Fire with Fear

The A to Z Challenge takes us on a journey through the month of April. We write Monday through Saturday and take Sunday off. Hence, 26 days and 26 letters of the alphabet. Come in and see what snippet I'm sharing with you today. 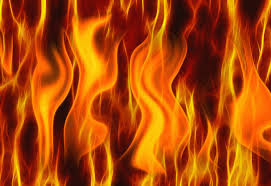 Every year, at the hospital, all employees had to complete a safety in-service. We had to put a fire out on a patient! We used manikins and actually fought a 'real' fire. We had to learn to use the fire extinguishers. They set the in-service up in the parking lot. They built fires. They handed us the extinguisher and we put the fire out. It wasn't like watching a film. We put out the fires. And spent the rest of the night at work smelling like smoke. Everyone hated it. Everyone complained. But a night came when everyone was glad we had practiced putting out fires. And evacuating areas both laterally and horizontally! I will never forget that night.

I hadn't been at work very long. A lot of the evening shift people had left. But there were still some on the floor, finishing up their charting. Just a normal beginning of a shift. I was on the phone with my teen son, who was checking in that he had just gotten home. The fire alarms were sounding. Not unusual. They often tested them. Sometimes they malfunctioned. The fire doors had closed. I received a call from the nursing supervisor on another line. I put Justin on 'hold' and took her call. She yelled, frantically, into the phone, "I need you on 5300. We are evacuating. Fire". I could hear the panic in her voice.

So I ran. We were on the 5200 area. Just a few steps away. I burst through the fire doors and turned the corner to 5300. I stopped at their closed fire doors. The area was filled with a dark black smoke. My first thoughts were, "they really want me to come in there?" Without a second thought, my training took over. I pushed through the doors and got down low. I was looking for the bright orange stickers that were telling me which rooms needed evacuated yet. I began to open doors. Soon the firemen arrived. There were huge fire hoses everywhere. I was told what rooms to avoid. Room 5306 was where the fire was located. All other rooms were to be cleared. A total of 22 patients to be removed.

I went into each room and found a washcloth and dampened it with water. This was to cover the mouth and nose of the patient being taken out through the smoke. After everything was over many of us realized that we should have covered our own mouths and noses. We had dark black soot  inside our nostrils.

Those who were able to walk were taken out first. We lined them up in the areas away from the fire. Then came those who were not able to walk. They had to come in their beds. Or we had to carry them. I was thankful all of those firemen were there to help us lift those heavy beds over the fire hoses.

Patients were being lined up in corridors away from the fire area. They were supposed to be accompanied by their medical record. This didn't always happen. One patient stopped me and pointed to another patient who was profusely sweating and was confused. Thank goodness she was able to tell me "diabetic". Orange juice was found and another patient stayed with her.

Eventually, the entire area was clear of all patients. The lady in room 5306 was taken to ICU where she later died of her smoke inhalation injuries. She had been smoking, in bed, with her oxygen on! Very sad. Many people's lives were endangered. Patients were saddened and many were angry. But 22 lives were saved that night!

A couple of days later we gathered to critique our rescue efforts. Those orange dots did NOT work. People were still in rooms where the dot was placed. This was supposed to indicate the room was empty. New systems were devised. It was strongly impressed on staff how important to get the medical record to accompany each patient. The staff was debriefed and allowed to vent.

Lessons were learned. And fire was fought with fear!! Have you ever had to help with a fire evacuation? Or another kind of rescue effort?