This is our last Hodgepodge before Christmas. Joyce is taking a Christmas break next week. Then Hodgepodge will be back on December 30th! Join From This Side of the Pond to answer this weeks prompts!!

LOL! I could go on and on with my 'first world' problems. But the one that is annoying me most today is my internet connection. So s.l.o.w......and it is my own fault. I have an old modem and router. I need to get into the car and go to the cable store and pick up a new one. The cable store is on the other side of town. And I am lazy. Can it get more 'first world' than that???


2.  Each year Time Magazine names a 'Person of the Year', someone who has 'for better or worse...done the most to influence the events of the year.' It was recently announced they've named Angela Merkel Person of the Year for 2015. You can read more about this year's selection here. Your thoughts? If you were in charge, who would you declare Person of the Year?

Well, I had never heard of Angela Merkel until she was appointed Time Magazines Person of the Year. The only thing I know about Time Magazines Person of the Year is what I hear on TV. I don't read Time Magazine. This lady certainly sounds like she is important and would qualify for this title. I went to research who other "persons of the year" have been and to my surprise found names like Stalin, Hitler, Khrushchev, and others who fit into these categories and wonder why they would select such men!! I think when you make someone "Person of the Year" it shouldn't be because they kill people or suppress their country in some way or another. After reading how they select the "person of the year" I have decided that they are not bestowing an honor (although many see it as such) but just telling us who was the biggest newsmaker of the year. With that being said, I would nominate "The Gun" to be the 'person' of the year. Every single day there are more stories about school shootings, cop shootings, accidental shootings, kids killing kids, gang members and drive-by shootings. And yet, this country continues to fight against gun control. Of any kind! And use the Constitution of the United States of America as their excuse. The Constitution was written at such a time as every home needed a gun for protection and for acquiring food. That is no longer the case. I would love to at least see gun registration, mental health testing, licenses, and anything that makes it harder for every person in the world to have a loaded gun at their disposal. Stepping down from my soap box now!


3. Do you have a nativity set in your home? If so share it's history and how you display the pieces. 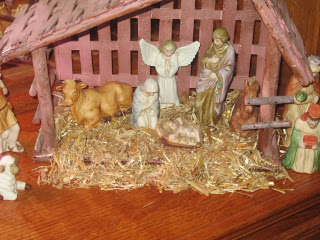 This is my little nativity set. I have had it for about 30 years. Maybe more. I bought it from a 'home party' system and have loved it from day one. I bought a little hay bale years ago to use for the hay in the bottom of the manger. Over the years Joseph and one of the Kings have gotten broken. Yet, I still use them. And I always set it up in the same order: first the manger and then I spread the hay. Then I place the donkey, the cow, Joseph and Mary inside the manger. Next is Baby Jesus and the Angel. Then the shepherd and his sheep. And finally the Three Kings! I am going to look at Nativity sets one day to replace this one. But not yet! This is still one of my favorite Christmas decorations of all time.


4.  Do you make an extra effort to give back in some way during the holiday season? How do you encourage those who need encouragement this time of year?

Yes, we do make an extra effort to give back. We try to do it more often than just at Christmas. I take things down to the food bank at least twice a year. And I donate to Goodwill all the time. But at Christmas we always try to find someone in need that can use a hand-up. The past couple of years it was a teen at the kids' high school. This year the kids' youth group raised money for 2 homeless teens in our town. This was our special project this year.


5. Who is your favorite person to shop for? Why?

I don't like to shop! For most anyone. Last year my favorite person was our 'adopted' teen. I loved thinking how he would be surprised to find the gifts we picked specially for him. They were given anonymously to him by the school principal. And we have no idea who he is. As it should be.

For our dinner I made a very good Chicken pot pie. Instead of using a pie dough for the crust, I used chicken stuffing on top. The filling was chicken, broccoli, cauliflower and chicken gravy. Yum, along with cranberry sauce, it was a very tasty meal. And so easy to make!! But when I think 'delicious' my mouth always waters for a Lindor Truffle!!

The best way to spread Christmas cheer is to love each other all through the year. And to remember why we celebrate Christmas.


8. Insert your own random thought here.


We'll be missing him at Christmas!﻿