The Devil in the White City-A Book Review

This is the overview from Barnes and Nobel: 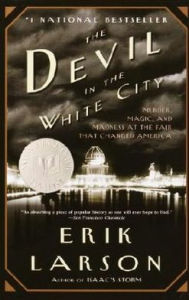 "Two men, each handsome and unusually adept at his chosen work, embodied an element of the great dynamic that characterized America's rush toward the twentieth century. The architect was Daniel Hudson Burnham, the fair's brilliant director of works and the builder of many of the country's most important structures, including the Flatiron Building in New York and Union Station in Washington, D.C. The murderer was Henry H. Holmes, a young doctor who, in a malign parody of the White City, built his "World's Fair Hotel" just west of the fairgrounds - a torture palace complete with dissection table, gas chamber, and 3,000-degree crematorium. Burnham overcame tremendous obstacles and tragedies as he organized the talents of Frederick Law Olmsted, Charles McKim, Louis Sullivan, and others to transform swampy Jackson Park into the White City, while Holmes used the attraction of the great fair and his own satanic charms to lure scores of young women to their deaths. What makes the story all the more chilling is that Holmes really lived, walking the grounds of that dream city by the lake." The Devil in the White City draws the reader into a time of magic and majesty, made all the more appealing by a supporting cast of real-life characters, including Buffalo Bill, Theodore Dreiser, Susan B. Anthony, Thomas Edison, Archduke Francis Ferdinand, and others. In this book the smoke, romance, and mystery of the Gilded Age come alive as never before.


I finished the book. Finally! I haven't been reading as much recently. In fact, when I was writing down all my books for 2015 it looks as it I read much more at the beginning of the year and then started dwindling as the year went along. Not sure why that it. But it is what it is.

I enjoyed reading this book. It is a true story written by Erik Larson. This author, through his meticulous research, is able to blend the building of the Chicago World's Fair and the murderer, H.H. Holmes into a story that almost reads like a novel. I was so impressed by the historical facts of the building of a world's fair and the many products and devices that we now take for granted that came about because of that Fair. Things such as the automatic dish washer (and this was back in the 1890's), Aunt Jemima pancakes, Juicy Fruit gun, Cracker Jacks.  Not to mention the Ferris Wheel!! I am not a history buff and I didn't know the origin of many of these things. I cannot imagine how so many women could disappear, never to be heard from again, and this murderer went undetected for so long. We have come such a long, long way.

I will read more of his books. And I will happily award this book four stars. ****