Overview from Barnes and Nobel: 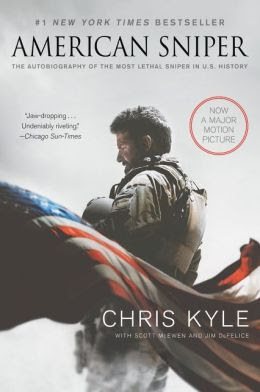 From 1999 to 2009, U.S. Navy SEAL Chris Kyle recorded the most career sniper kills in United States military history. His fellow American warriors, whom he protected with deadly precision from rooftops and stealth positions during the Iraq War, called him "The Legend"; meanwhile, the enemy feared him so much they named him al-Shaitan ("the devil") and placed a bounty on his head. Kyle, who was tragically killed in 2013, writes honestly about the pain of war—including the deaths of two close SEAL teammates—and in moving first-person passages throughout, his wife, Taya, speaks openly about the strains of war on their family, as well as on Chris. Gripping and unforgettable, Kyle's masterful account of his extraordinary battlefield experiences ranks as one of the great war memoirs of all time.
Includes new material by Taya Kyle about the making of the American Sniper film


Today I finally finished reading American Sniper. I am going to just tell it like it is as far as my opinion. I am sure I won't have a popular opinion, but to anyone who knows me, it doesn't matter. Because it is my opinion.

As I said before, if I had met Chris Kyle in person, I am sure I would never have liked him. He is very conceited and full of himself. Maybe that is how you have to be to be a sniper. I don't know. I always had the opinion that SEALS did not brag about what they did. But this guy was very full of himself and loved to brag. I just don't like those kinds of people.

The writing of the book, in my opinion, was terrible. It seemed dull and juvenile. I know  he had help from a writer but I just didn't feel like it read well. He seemed to skip around a lot. None of the characters were very well developed. Well except for Chris Kyle. That one I felt I got to know too well. I wonder, if in life, he was really just like this.

First of all I hate war. And this particular war is one I never agreed with. I don't understand why we, as Americans, feel it is okay to go into other countries and kill people just because we don't agree with their lifestyle. Isn't that what we hate so much about them coming into our country and trying to kill us? How do we justify all of this. It is probably not something I will ever be able to understand.

I have heard people describe their feelings as they read this book: they laughed, they cried, they couldn't put the book down. Mostly I cringed, shuddered, and had to force myself to get to the end. Because I hate to not finish a book once I start it.

Killing insurgents in Iraq was one thing. I could (kind of) wrap my head around why that was being done. But all the bar fights and hazing ceremonies he described made me think more of adolescents trying to prove they are tough. Time for grown men to get over themselves. This was a grown man who had a family back in the United States. Although, according to him, they came in third in his life. He believed that it was God, Country, and then family. I couldn't be married to a man who always put me last.

I felt sorry for his wife throughout the book. I know she stayed with him because she loved him and she had vowed to stay through better or worse. I understand she is writing a book. This is a book I will want to read. Although, after his death, I am sure her views of the situation will be somewhat glazed over. Maybe not.

I want to end this with saying: Chris Kyle wanted the world to see him as a 'badass'. The only way I ended up seeing him was as 'bad' and an 'ass'. That is why I don't think I would have liked him.

I do plan to see the movie. Maybe I will have a better feel for him after seeing it.

With that being said I do respect the American soldiers for the job they have to do. I thank them for keeping our country free. But I don't have to like them!!
Posted by Paula at 12:57 PM