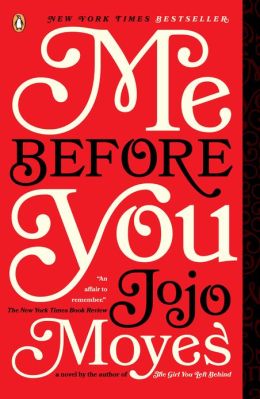 The beloved New York Times bestseller—with more than five million copies sold—by the author of One Plus One and The Girl You Left Behind
They had nothing in common until love gave them everything to lose . . .
Louisa Clark is an ordinary girl living an exceedingly ordinary life—steady boyfriend, close family—who has barely been farther afield than their tiny village. She takes a badly needed job working for ex–Master of the Universe Will Traynor, who is wheelchair bound after an accident. Will has always lived a huge life—big deals, extreme sports, worldwide travel—and now he’s pretty sure he cannot live the way he is.
Will is acerbic, moody, bossy—but Lou refuses to treat him with kid gloves, and soon his happiness means more to her than she expected. When she learns that Will has shocking plans of his own, she sets out to show him that life is still worth living.
A Love Story for this generation, Me Before You brings to life two people who couldn’t have less in common—a heartbreakingly romantic novel that asks, What do you do when making the person you love happy also means breaking your own heart?

This book is not my usual genre of reading material. I usually like mysteries and thrillers best. Once in awhile I like to venture out of my comfort zone and read something else. Usually, though, I will never chose a love story. Just not my thing.

I read this book upon the recommendation of some of my friends. Most especially Kwizgiver! She hasn't led me astray yet with a book recommendation.

When I was in nursing school, many moons ago, we discussed how we would react to a situation much like this one. How would we feel about having a son who had lost total control of his body (paraplegic) but nothing was wrong with his mind. How would we feel if he did not want to go on living? Would we want him to live even though it meant he'd never be able to do a thing for himself all the rest of his life? At that time I can remember feeling that, no matter what, he would still be my son and of course I would want him to continue to live. I would find a way to make his life worth living!!

In this story we get to hear from Will, a paraplegic. His feelings about life after his accident and how he doesn't any longer want to live his life. And how Louisa, his caregiver, goes about making him want to live. Powerful stuff!

I liked all the characters in the book except for the sister Treena. She needed a kick in her selfish little butt. And I don't know that she really added anything to the story. The characters were all well developed with many layers. I thought Will's mother was a bit of a bi**h, but then if I put myself in her place, I imagine I would be very much the same. Minus all the money of course.

I HIGHLY recommend this book. And don't forget to keep your box of tissues near. You will need them.
Posted by Paula at 12:10 PM