This is the overview written by Barnes and Noble: 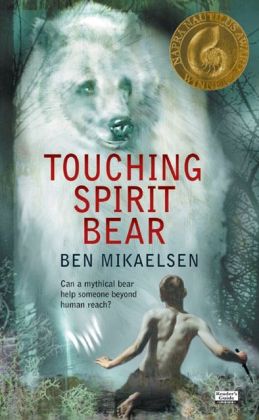 Within Cole Matthews lie anger, rage, and hate. Cole has been stealing, fighting, and lying for years. His attack on a classmate has left the boy with permanent physical and deep psychological damage and Cole in the biggest trouble of his life. To most, Cole seems beyond hope. But when he's offered a chance at an alternative path called Circle Justice, based on Native American tradition, Cole finds himself banished to a remote Alaskan island, where his rage and isolation lead him to another brazen attack. This time, his intended victim is the Spirit Bear of Native American legend—and the clumsy assault ends with Cole mauled nearly to death, desperately clinging to the life he has tried so hard to
waste.

Rescuers arrive to save Cole's life, but it is the attack of the Spirit Bear that is the start of Cole's long journey to accepting responsibility for his life and saving his soul.
This gripping, graphic survival story from an award-winning writer paints an unsparing picture of one violent teen and offers a poignant testimony to the power of pain that can destroy and may also heal.

When Darian and Harley first came to live with us Darian was struggling, much like the boy Cole in this story. He hadn't yet reached a place where he left someone with permanent damage (thank God) but he was lying, fighting, stealing and getting into lots of trouble at school. It was early in his 7th grade year that this book was given as an assignment. He loved the story. I have been meaning to read it for some time and yesterday I downloaded it to my Nook and spent the entire day reading it. The book is less than 200 pages so it was a quick read. I do not have a single doubt in my mind that this book made a big impact on Darian. I did not know this at that time. We were struggling to get him on the right path. Sometimes things are placed in our lives for all the right reasons. I think this was one of those times....Darian is now an up-standing student who no longer fights, steals, or lies (well maybe he still does this some). His life is turned around. I am so thankful that he is with us and had the opportunities he has had. This book is a powerful story. I highly recommend reading it.