A new Tuesday. The first Tuesday in October. The beginning. We all like beginnings. I will like beginning again. As soon as I get through being stuck in the past. For now that is what feels good....

I finished reading What Alice Forgot  by Liane Moriarty. What a roller coaster ride it was too. I went through all kinds of emotions as I read this book. For some reason it brought back so many memories of my own marriage. The good and the bad. And how I try to cover up the bad parts because Richard isn't here anymore. And I only want to remember what was good.....but that isn't a book review is it? Here is what Barnes and Nobel has to say about this book 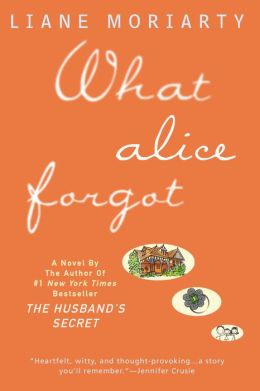 "Alice Love is twenty-nine, crazy about her husband, and pregnant with her first child.

So imagine Alice’s surprise when she comes to on the floor of a gym (a gym! She HATES the gym) and is whisked off to the hospital where she discovers the honeymoon is truly over — she’s getting divorced, she has three kids, and she’s actually 39 years old. Alice must reconstruct the events of a lost decade, and find out whether it’s possible to reconstruct her life at the same time. She has to figure out why her sister hardly talks to her, and how is it that she’s become one of those super skinny moms with really expensive clothes. Ultimately, Alice must discover whether forgetting is a blessing or a curse, and whether it’s possible to start over…"

As I began reading this book I found that Alice had lost her memory of the last ten years of her life...she'd forgotten her children, her friends, her sister's life, and how much she hated the husband she was getting ready to divorce. The story takes us through her trying very hard to unravel her life. And it seems she really isn't liking the woman she has become. She hasn't been there for her sister who is going through horrible fertility problems (we learn about this through letters written by the sister to her therapist) and she had no idea that her Grandma, Frannie, (who isn't really her grandma) had a past life where she was in love with a fiance who died just weeks before the wedding. We learn this story through a series of letters that Frannie writes to her dead fiance. (Much like I am writing letters to Richard). She has a boyfriend and a new lifestyle that is so unlike what she believes herself to be that finding herself becomes a necessity. She has lost her best friend, one she doesn't even remember meeting, and that seems to be what everyone thinks was the beginning of her UN-raveling. I am positive this book was sent to me to read for a reason. It touched so many pieces of my life. I bawled my way through it. Those great howling sobs of a grieving widow. Although, Alice had not lost her love to death, she had lost him. What I wouldn't give to get to do the last 10 years of my life over again. And hopefully come out of it better. Alice you rock! You got it right! If you haven't read this book you must.
Posted by Paula at 2:13 PM