Sometimes life just gets crazy, doesn't it? Mine isn't so much that things are busy. (I haven't even wrapped a present yet.) But when you are caring for a loved one that can keep your pretty busy...either caring for them or worrying about them. Anyhow, first, we'll talk about how last weeks menu plan went.

On Monday I switched with Wednesday and we had biscuits and gravy. Darian and Harley really, really like it when we have breakfast for dinner.

Tuesday we did have Baked potato soup and it was delicious. I even had it for a late night snack and lunch on Wednesday.

Wednesday I finally made the John Wayne Casserole. It really wasn't all that great. In fact, if I make it again I will have to find a way to spice it up some. I know when something is really good.....the kids go back for seconds. They didn't for this. So I didn't even keep the leftovers.

Thursday was the day that Richard got sicker and slept around the clock. So I just had a sliced apple and cheese and crackers. Darian was wrestling and Harley had a basketball game.

Firday Richard was still down. And I was so depressed and feeling sad that we ate leftovers. The kids made a frozen pizza. And I felt sorry for myself. Boo! Hoo!

Saturday the kids were to go to their progressive dinner but we had so much snow and ice that they canceled it. So it was hot dogs for the kids and I. Richard had a pudding cup.

Sunday we were to have chicken and noodles. But the progressive dinner was on again. And my son, Justin, is home sick with the flu. So grilled cheese for Richard and I. He ate a half sandwich. Is still coughing but a bit better today. Very confused unfortunately.

Now on to this week's plan: 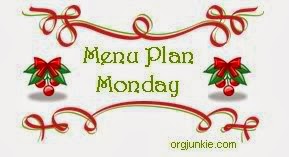 Although it is Christmas Day we aren't having ours until tomorrow so today we will finish off all the leftovers.

I am linking up with I'm an Organizing Junkie.
Check out some others meal plans