Drugs and Alcohol and my life

Day Three
Your Views on Drugs and Alcohol
There is a long, long history of drug/alcohol addiction in my family. I don't really know how far back it goes. But I do know that my father was an alcoholic. And I don't know if I ever saw him sober. There are some heavy drinkers in my immediate family. And my oldest son is addicted to meth! My ex-husband is an alcoholic and a meth addict. Drugs and alcohol have impacted my life is a BIG way.
I remember when I was a small child not really understanding what it meant that my dad drank. We would often get into the car to go to the bars to find him. I can remember the smells from the bars. I remember the thick, hanging cigarette smoke. And the smells of stale beer. And all the men sitting on the bar stools or playing dominoes or pool. I remember how my mom and dad would fight. I didn't know that it was because of alcohol. I just know that they fought. And that sometimes it was violent. Sometimes he would hit my mom. And sometimes he would hit one or more of us kids. And once I can remember that my mom hit him. With an iron. And the police came. And we went to grandma's house. And then the end that came when  my dad committed suicide. But it did not end there.
My mom re-married. And he, too, was an alcoholic. And there was more fighting. And drinking. And the money issues. Because he would spend it all on alcohol. My mom was a classic enabler. She was attracted to these types of men. After many years of drinking my step-father quit. I was an adult with young children of my own. It was good that he quit. But then came the need for prescription pain medications. And that led to problems of another kind.
Then I was married for the first time. And my husband was in the Navy. And it was the 1960's. And there was a LOT of marijuana around then. My husband liked to smoke. And he drank. And he got a job selling it on the West coast and did not want to come home to his family. And it destroyed a marriage.
One day I received a phone call. The caller did not tell me who she was. She said that my oldest son was a drug addict and he needed help. He had two little kids by this time. Their mother was in jail. She was a habitual traffic offender. He was taking care of these two tiny little kids. But I knew in my heart that he was a drug addict. I didn't want to believe it. I wanted to keep my head in the sand. The law would be coming to his house. We helped him get rid of anything that might cause him some problems. But that only helped him to hide it better. I had to wake up. I had to admit it. He went to jail. He went to rehab. He went to jail. He went to rehab. A pattern was forming. I no longer had my head in the sand. And I could no longer enable him. We took his kids. We hired a lawyer. We told him it was over. It's up to him now and what kind of life he wants to live. And it is hard! But we have to stop the cycle. We have to stop the madness. We have to do what we can to end the patterns. We have taken a stance and we will fight the fight. Every single day. Until we win. 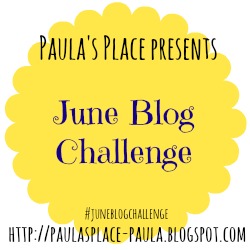 Please link up with us so we can all come and read your views!
JUNE PHOTO A DAY CHALLENGE
ON MY TABLE 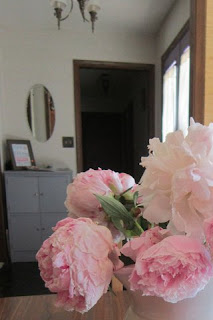 These flowers are sitting on my table and they look kind of like I have been feeling this week.
A little droopy. A little ragged. But still a bit pretty.
Click on the Photo Challenge link to join us!
Posted by Paula at 11:05 PM