Day 18, Saturday: Tell a story from your childhood. Dig deep and
try to be descriptive about what you remember and how you felt

The first Christmas, after my dad committed suicide, was going to be a rough Christmas. I had turned 8 that year in April. My baby brother was just 6. The older kids were 10 and 12. My grandma had already told us plenty of times that Christmas was not going to be a 'big deal' this year because our dad was dead. She continually reminded us that it was mom and dad who played Santa Claus. There was no such thing as a magical man who came and left us a bunch of toys. Well first of all, we never really got a bunch of toys. And second, I was already beginning to suspect that it might be my parents. But did she really need to be so mean? I can remember my little brother crying because Santa wasn't going to come to our house. And it made me dislike that fat, old woman even more. (I think I have said on my blog before that this old woman was my inspiration to be the BEST grandma I could be. Because she wasn't)

I remember the cold wintry day when the huge and lumbering truck made it's way down our alley. Stopped in front of our door. A big guy jumped out of the driver's seat and climbed into the back of the truck. He handed down a large basket filled with food. A big turkey and some ham. Lots of canned foods. Bread and there may have even been some cookies. I remember that big red and white box of powdered milk. We were giddy with excitement. There were five of us kids, and I am sure that even though mom tried her best, our bellies were always hungry. This looked like a mountain of food to my 8 year old eyes.

Then the man, who I am sure WAS Santa dressed in his everyday clothes, jumped back up into the truck and started handing down the toys. I don't remember anything that he gave to anyone else that day. But he handed me a pie! It was painted yellow  and some of the paint was missing from the sides (you see, it was a donated toy) and there were tiny little slits all over the top of the pie. Like the kind of slits that you make to let the steam escape. Attached to side of this pie was a little crooked handle with a tiny red knob. As I wound the crank I heard the tinny sound of:

Sing a song of sixpence,
A pocket full of rye.
Four and twenty blackbirds,
Baked in a pie.

When the pie was opened,
The birds began to sing;
Wasn't that a dainty dish,
To set before the king?

The king was in his counting house,
Counting out his money;
The queen was in the parlor,
Eating bread and honey.

The maid was in the garden,
Hanging out the clothes,
When down came a blackbird
And pecked off her nose.
As the song ended out through those slits in the pie came little tin black birds. At the time I thought this was just pretty cool. But over the years of my life, this little pie took on the meaning of what our life was. We were very poor. And we were given food and gifts from the Salvation Army. And I hated it! I hated being poor. And I hated getting gifts that had already belonged to another child and played with until he no longer wanted it. I know that sounds terrible. And it sounds so ungrateful But that is how I felt. It made me very sad. I no longer have that pie that represented such a sad and poor time of my life. (I wish I had kept it) But I have never forgotten that day. And the lesson that I learned from that day? I donate brand, spanking, new toys to the less fortunate kids today. No used toys! No peeling paint. And I wrap them in sparkling crisp wrapping paper with plenty of ribbons and bows. Because to a child it is not the present inside that matters. It is the mystery of getting to it that is what really matters. Recently this whole memory came flooding back to me when I found the pie on EBAY. And here it is: 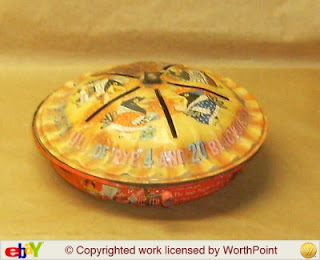 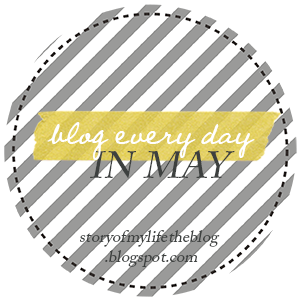