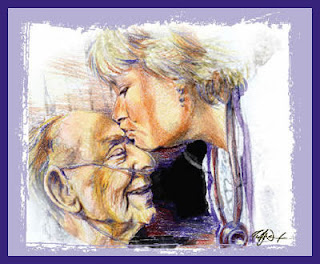 Today I took Richard to the doctor. It was an ordeal to get him there. He is SO weak.  We had to see the doctor. We didn't have a choice. You see, in January of this year we got a letter in the mail stating that his long-time doctor had to suddenly retire to take care of some of his own health issues. That left us with no one. So I made an appointment for Richard. And had to cancel it due to the weather. I wondered if he would make it to see a new doctor. The doctors were unaware of how bad he had gotten. They didn't know that he was refusing to eat or take any medications. They didn't know about the episodes before Christmas when he would briefly lose consciousness. They did not know about last Tuesday when he stopped breathing. I was not sure he would live long enough to see a new doctor. But today we went.
His new doctor is very young. She is very nice. And she, too, agrees that it is time for Hospice. So we will be having the Hospice come to evaluate him and see how they can help us. His doctor stopped all of his medications. He wasn't taking them anyway. She said just to allow him to decide when and what to eat. We have been doing that anyway. He has lost 35 pounds since he last saw the doctor. I knew that he was losing, but I was surprised as to how much. He hardly eats anything. He still is taking fluids well. Well, as well as can be expected.  The doctor talked with him about his wishes. She asked him if Hospice is what he wants to do. He told her he just wants to stay home. He wants to be comfortable. He wants me to quit bugging him about eating. Love that man! He still has his humor.
So we will wait for Hospice to come. Tonight he asked for a BLT. I couldn't believe it. He hasn't wanted to eat anything. So I went to the store and bought things for a BLT. He ate 1/4 of a sandwich, a few chips, and a dill pickle. We were thrilled. He looks good tonight. His cheeks are pink. I am hoping it is not the calm before the storm. But we will be ready. He will never leave our hearts. He will always be with us. ALWAYS.
Posted by Paula at 11:19 PM