What's In a Name?

Names have always been a fascination of mine. It is true that it is just a grouping of letters, organized in a manner that will identify a person. But a name CAN identify you. Either in a good way or a not so good way. People know you by your name. And they get an idea about you because of your name. 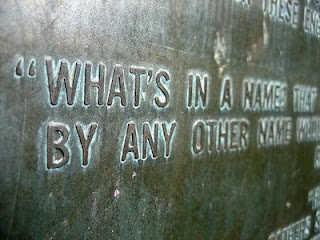 For instance, my name, Paula. It is the feminine form of Paul. However, I was name after my mother, whose name was Pauline. The name Paula is Latin in origin and the meaning is "small". Ha! Ha! I laugh everything I read that. Anyone who knows me, knows that I am not small. My mother was not small and neither was HER mother. We are big women! The name Paula has been around since early Christian times. It is thought to be in honor of St. Paul. But it wasn't a widely used name until the 20th century. Mostly used my Germans. The name Paula appears as number 95 out of 4,276 names on the chart of popular names, with it's greatest year of popularity being in the 1960's. Funny thing is, I hardly know of anyone else names Paula. I have run into a few in my lifetime. But not nearly as many as I have Mary's or Susan's or etc. What I have heard mostly associated with my name over the years is the popular song "Hey, Hey Paula" sang by Paul & Paula and the number one song in 1963. There were times in my life that I secretly thought of choking the next person that sang that song to me. And did I like my name when I was growing up? NOT so much. For some reason unknown to even me, I wanted to be named Connie. But, I am okay with it now.
Now as far as my last name goes, that is a 'whole nuther story'. I have done some research on the RINEY name over the years. I have read that it could be a Scottish name. And I have read that it could be a German name. And I am not sure at all which it is. My mother told me one time many years ago that at one time it was Von Rhine which was changed when the ancerstors came to America and dropped the Von and changed the spelling to Riney. I have no idea what the truth of the matter is. I do know that the name was a souce of discontent to me as a child. In fact, I used to dream of changing it to ANYTHING as soon as I could. You want to know why? Because the pronunciation of the name is rye-knee (long I). And unfortunately that rhymes with hiney. Isn't that an interesting word. It refers to one's 'hind-end'. Their butt. And what I heard, while growing up (A LOT) was Paula Riney, with the big-fat hiney. And I hated it! HATED it! Can I say that often enough? I HATED it! Now as an adult, I know that kids will take any name and figure out how they can torture a child with it. For instance, my son's often heard the term 'maxi-pads' associated with their last name. But because kids can be so cruel, I grew up hating my last name and couldn't wait to change it. I never ever gave any consideration to keeping my maiden name when I became married the first time. Yep, I know. It is my idenity. And I happily and willingly gave it away. Now, when I got married the second time, I kept my first husband's name. Does that even make any sense to any of you? It makes sense to me. Cause it is the name that I have had since I was 18 years old. It is the name I went to business school and used. It is the name my boys have. It is the name I graduated from college with and obtained my nursing license with. It is the name on all my identifying records that I carry in my billfold. It is MY name. I don't see it as the name of my FIRST husband. Took awhile to convince my second husband of that, but he came around. And he is okay with it.
Enough about MY name. Now we can get down to why I wanted to write this post. I have run into some funny names in my life time. Like the name of the mortuary in a town that I lived in as a young child. LIVINGSTON'S Mortuary. Do you see the humor there? I always thought it was funny. Or the doctor at the clinic whose name was Dr PAINE...who wants to go to a doctor with that kind of name? I would be afraid of the pain he might cause me. Or what about Dr. SWEET....a dentist here in the town where I currently live. I am sure you all have heard plenty of those kinds of names. And I hope you will share them with me here in the comments section.
A couple of the funniest name I ran into in my years as a nurse...........a guy named HARRY WHACKER.....are you kidding me. (I am not breaching patient confidentiality here cause I did a Google search and there are plenty of HARRY WHACKERS out there. No pun intended). But this particular HARRY WHACKER  was an old man who came to the hospital for prostate surgery. Another name that sticks in my mind over the years is the name DIMPLE. Who on earth would ever name their baby girl DIMPLE? And that being bad enough she grew up and married a gentleman by the name of Mr. Slimp. I am sure she heard plenty of comments about that one. But I would still rather have her name than Paula Kaye Riney (with the big fat hiney).
Posted by Paula at 2:40 PM