Saturday Nine: Good Morning Heartache
1. Do you come up with your brightest ideas early in the morning or late at night?
I am not a morning person so I would have to say late at night.
2.Are you more likely to feel romantic at night or in the morning?
I am most likely to feel romantic.....NEVER! I am an old woman and I don't feel romantic any longer. Maybe in my dreams!
3.Do you shower in the morning, after work, or before bed?
I shower when I shower. Depends! Sometimes mornings, sometimes nights. Sometimes both....
4.Billy Holiday was just 44 when she died. Is there an artist whose early demise surprised and saddened you.
Ah that would have to be Elvis! I wasn't really surprised but I was very saddened
Elvis was then, and always will be, my favorite artist. To me, as a young girl, he was the dreamiest man of all time. And every song he sang, he sang to ME. I was a young mother vacationing in California when we heard that Elvis had died. It was like losing the President of the United States. Everything stopped and we were glued to the TV and watched every moment of coverage. How very sad it was. But, today when I watch an Elvis movie on TV, I invariably say...."that man could sing, but he sure as heck could not ACT" 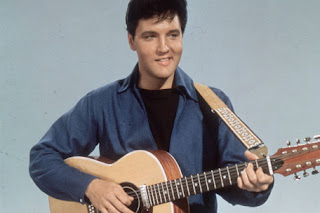 Early Elvis
5. Billy was known as "Lady Day". Do you have a cool nickname?
I don't know if I would say that it is a cool nickname. When I was born my mother gave me the name of Paula Kaye. My just older brother could never say Paula Kaye. So, he called me Pokay and this became Pokey and that is what some of them (those that are brave enough, that is) still call me.
6. When was the last time you had the blues?
Oh I have the blues everyday at some point or another.
7.Crazy Sam is eating Trader Joe's Snicker-doodles
as she composes this. What is the last snack food you ate?
I ate potato chips with sour cream last night just before I went to sleep. This is my favorite comfort food of all time. And these days I need a lot of comforting.
8. Do you worry about preserving endangered species? Or do you believe in survival of the fittest?
I don't think I believe in ANYTHING like this. And I don't worry about endangered species either. I have way too much in my own house to worry about. Sorry!
9.Would you ever hire a lawyer who runs commercials on TV?  Do you know anyone who has?
I doubt that I would hire a lawyer from TV. We have our own lawyer and I can't imagine him doing a TV commercial. However, I once sat on a jury that the defendant was represented by one of those TV lawyers who advertises in our area. And he was every bit as sleazy in person as he was on TV. And he LOST too.