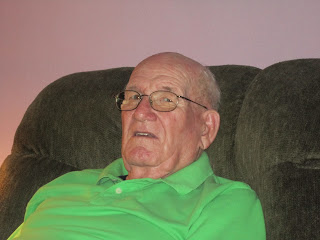 One year ago today, Richard suffered an occipital stroke, that has changed our lives forever.It has been a long year. It has been a good year. When this happened last year, I was not sure that he would ever leave the hospital, let alone still be with us one year later. We were so lucky to have gotten him to the hospital in time for the IV treatment that kept the stroke from causing more damage then it did. You can read about those days here and here and here.
This September has been another challenge for us. Fall seems to be a time of struggle for Richard. Last Saturday night (well, really it was early Sunday morning) he woke me and said he didn't feel very good and was going to go out into the living room to sleep in his recliner. I got up with him and settled onto the couch. He slept ALL day that day in his recliner, getting up only to go to the bathroom. He would not eat. He would not take any medications. By night time he was very weak. And very pale. Darian paced the floor all day and spent a lot of time out in the gazebo by himself. Harley shed a few tears.
During this night it was awful. He couldn't hardly walk at all. No Parkinson's meds since Saturday. Parkinson's meds leave the system fast. That is why there are usually so many doses in the daytime. They don't build up like other meds. He had to be taken to the bathroom three times and three times he peed all over himself. Very stressful for both of us. I talked to him about calling the doctor. He is very adamant about this. Does not want the doctor and does not want to go to the hospital. I will honor his wishes for as long as I can do it at home.
Later On Monday afternoon, I am sure that we are losing our Papa. I notify Brooke so that she can prepare Paige. And I call Justin. Before Justin calls me back, Papa decided he wants to eat something. This is the first sign of improvement that I have seen. It is the beginning of the roller coaster ride. Up, up, up we chug to the top and shoosh we speed down to the lows. I tell Justin not to come. He is better. Justin says he will come on Tuesday for sure. He and Trina will take care of dinner. That sounds good to me.
Brother Chuck comes out and brings with him a brand new bedside commode sent by my new found friend Lana, the Coupon Sailor. Hopefully this will help with the night time.
When Justin comes on Tuesday evening, he orders Pizza for supper. Papa gets up to the table and eats a piece of Pizza. Justin, I know, is having a hard time believing that I thought Papa was dying just 24 hours ago.  But that is the way it goes. Justin stays all night and looks like things are looking up again.
Or not.................
By Wednesday around noon he was starting to complain about a bellyache. He hasn't hardly eaten anything since Saturday and he hasn't had a BM since Saturday. So I gave him a dose of MOM and we will see what happens. His fever is now gone. Wednesday night he sleeps until early morning and then he is up and wants to go to the bathroom. I help him down the hallway. He doesn't want to use the commode. He is so STUBBORN and full of pride. I half carry, half drag him down the hallway. He grabs the towel bar to steady himself and it falls off the wall. I yell at him.........."that is what happens when you do that" Harley is getting ready to go to school and she hears a thud and thinks that I have hit her Papa. LOL. Not that I haven't thought about it a time or two. When I get him settled back into his chair in the living room both Harley and I lecture him on his having to use the commode. He is agreeable at this moment.
Around noon, he is eating breakfast and reading the paper. Once again the roller coaster car has chugged to the top. Damn it; stay there. I want the brakes to hold. Chuck comes out and is surprised to see how much better he is. Later today he goes into the bathroom, with help and shaves. That makes him look better.
Friday morning I help him with a shower. That is an ordeal for both of us. I put the commode chair in the shower and get in there and help him scrub up. But it was all worth it cause he now looks and feels so much better. We just washed that week of sickness right down the drain.
I think we are probably where we are going to be now. Mostly at the top of the hill but short little episodes of lows. We will just now take it one day at a time. And thank the Lord everyday for the little things.
Posted by Paula at 1:30 PM