Rehabilitation.....what exactly does that mean. Richard is learning to walk with a walker. He can walk well but having the walker really gives him the stability that he has needed for a long time. They are trying to encourage him to take long strides (instead of the small shuffle steps he takes due to the Parkinson's disease) He needs constant reminding. They are working with him on dressing, toileting, and bathing. It is apparent he will need help with all of this. The biggest thing is they have told him he will NEVER be able to drive again. This is hard on most men and will be hard for Richard too; if he ever can remember that we have told him that. He is a independent man and will not want this taken away from him.
Therapy is intense. They work for 3 hours every morning. Then he has a rest period and then lunch. And then they are back for 3 hours in the afternoon. He is worn out. But, not sleeping good at night.I remind them that he uses sleeping pills at home. They will check with the doctor.
The memory remains the biggest obstacle. You can tell him what is going on and in 30 minutes he still does not remember.
Discharge planning is in place. We will leave for home on Wednesday morning, September 28. How is this going to change our lives. Time will tell. Everything is in place. And we will return to the hospital on October 4 for an overnight stay to have his right carotid cleaned out.
Posted by Paula at 6:23 PM No comments:

And the hard work begins

All of this happened on Friday night......my son and his girlfriend go home with me. Richard is on the ventilator in the ICU. His heart rate is still slow but it is stabilized. I will leave him to rest And hope that I will be able to rest also.
Saturday morning my cousin from Lawrence arrives. We go to the hospital! Richard is awake and aware that he has a tube in his throat to breathe for him. He is very restless. It is more than I can take. We do not know how much damage from the stroke that he has suffered. He has a catheter in his bladder and it is driving him crazy. He is fidgeting and trying to pull out the tubes. They sedate him with Diprovan. The same drug that killed Michael Jackson. They call it the 'milk of amesia'. But it works to keep him calmer. They try to wean him off the ventilator but it does not work. He is too sedated. He quits breathing. The machine is turned back on. The doctors come and go. He has one on one care. I am very scared. Family comes and goes. Justin stays with me.
Tomorrow morning (Sunday) they will again try to take him off the ventilator. Justin, Calvin and I go home. He is resting!
Sunday morning we go back to the hospital. He has passed the weaning test and the tube comes out of his throat. He is very confused. He does not know where he is. He does not know the date, the year, or who is the President of the United States. But his speech is clear and he is moving all extremities with equal strength. They want to do an MRI but he is too restless. So they do another CAT scan. He has had a stroke in the occipital lobe. Looks like it will affect vision and memory. Praise the Lord. It could have been so much worse.
Calvin goes back to Lawrence. Justin is going to stay. Darian and Harley come to the hospital to see their Papa. It scares Harley to see him like this. I will take them home tonight so that we can get them back on their schedule and normalacy will return to our lives. (Who am I kidding? It will never be normal again).
Monday morning is here. I cannot believe it has only been 2 days since my life was normal and I was at home wishing I did not need to start looking for a job again. (That's another story! But, be careful what you wish for. I go back to the hospital and the plan today is to move him to a regular room upstairs and start planning for the future. He still is confused and it looks like the short term memory is gone. Whatever we tell him we have to tell him again over and over. He now knows who the president is. Justin was glad he didn't have to break the news that Barack Obama was President. Richard is a die-hard Republican.
The move upstairs is hard on the confusion. Thinks he has moved to a different hospital. We have to keep telling him where he is. During the night he gets up and wonders around in his room so they move him to a room closer to the nurses and into a bed that alarms when he gets up. Oh boy! This is disturbing to me.
Today he is seen by all the rehab specialities to see if he qualifies to move into the intense rehab unit or if he goes to the skilled nursing unit. He also goes for a cardiac stress test. We are happy to hear that he will go into the rehab unit and receive intense therapy for most of the day. They move him downstairs to another new room. This is now his 4th room in as many days. And he cannot keep it all straight in his head. He does not remember Friday night at all. Maybe that is a good thing. His cardiologist decides we need to check his carotid arteries so he is scheduled for carotid angiograms tomorrow. I am stressed. Too much for him and too much for me.
Wednesday he starts therapy. He is worn out. But the day is not over. At 4 p.m. they take him to the cath lab for the angiogram. I have to go home to meet the school bus. We return to the hospital. He is still in the cath lab recovering but no doctor to tell me what they found. Hopefully I can talk to him tomorrow. Richard remains upbeat but confused. He does whatever they tell him. They are feeding him a pureed diet. He has aspiration pneumonia. What more can happen?
Posted by Paula at 10:43 PM No comments:

My life has forever changed 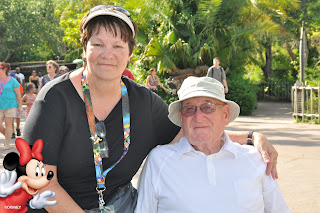 Look for the next installment....COMING SOON
Posted by Paula at 11:46 AM No comments: