Did you witness this site Monday December 2, 2008 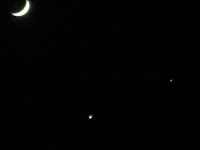 This picture above was taken at my house on Monday December 2, 2008 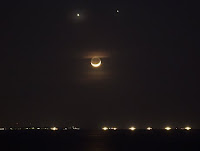 
December 2, 2008—The heavens smiled down on Earth Monday in a rare celestial trifecta of Venus, Jupiter, and the moon.
The planets aligned—an event known as a conjunction—Sunday night, and were joined by a thin sliver of moon on Monday.
(Related: "Sky Show December 1: Jupiter, Venus, Moon Make 'Frown'" [December 1, 2008].)
The rare planetary meeting was visible from all parts of the world, even from light-polluted cities such as Hong Kong and New York.
People in Asia witnessed a smiley face (above, photographed from Manila, Philippines), while skywatchers in the United States saw a frown.
The three brightest objects in the sky were so tightly gathered that one could eclipse them with a thumb, according to NASA's Web site.
The next visible Venus-Jupiter conjunction will be on the evening of March 14, 2012, but the two planets will appear farther apart in the sky.
Posted by Paula at 10:49 PM