Do you Remember Linclon Logs? 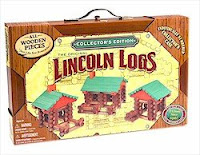 In the 1910s, American builders were busy on construction sites in the city and in the playroom. Introduced just after Tinkertoys and the Erector Set, Lincoln Logs were yet another construction toy to make it big during the decade. John Lloyd Wright, son of architect Frank Lloyd Wright, brought out the line of sturdy, interlocking logs in 1916. Wright claimed that the foundation of Tokyo’s earthquake-proof Imperial Hotel, which he saw while it was under construction, inspired the shape of his logs.Lincoln Logs turned out to be a toymaker’s dream. The original sets were an instant success, and after World War II, sales of Lincoln Logs got another boost from the baby boom. The sets were popular among postwar parents because they were more sophisticated than plain building blocks but still challenged children’s powers of concentration and eye-hand coordination. Ironically, Lincoln Logs—long a favorite of proponents of educational toys—were among the first toys to be promoted on a television show, 1953’s Pioneer Playhouse. The ads targeted affluent parents, who were most likely to own a television set and to buy educational toys. Sometimes a toy that has had a previous life returns to catch the eyes of children at just the right moment in history.
My grand daughter was here this weekend and she loves building things. She often plays with her daddy's old set of Legos. But granny had a surprise this weekend as hidden away in the closet was her Papa's old set of Lincoln Logs that he had gotten for Christmas when he was her same age.....long, long ago in 1941. Here she is with her creations 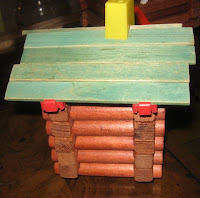 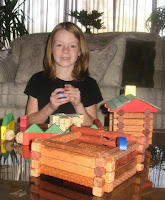 Email ThisBlogThis!Share to TwitterShare to FacebookShare to Pinterest
Labels: family