How is it even possible that I stopped blogging?? It has been the craziest of years hasn't it? I think about all of my blogging friends a lot but I just don't have the gumption to sit at the computer and compose. Has anyone else felt this way? Any how I will try to catch you all up on what is going on in my life.

I am pretty much still in 'quarantine'. Our town opened back up and the people went crazy and we are now suffering for it. We have more Covid here right now than months ago when it was bad everywhere else. Our hospital is full and turning patients away. We have had 28 deaths. I know that doesn't sound like a lot but we are not a big city. Just a town of about 40,000. The fools here will not wear masks. It is a Republican town so they think it is a hoax.  I haven't much left my house since all this nonsense started. I get my groceries through ClickList with Kroger's so all I have to do is drive down and get them loaded up. I have been doing this for a long, long time so that really isn't new. I have driven to the post office and went inside ONCE to mail a package. I wore my mask and social distanced. The cost of mailing the package was almost more than what I was mailing. That is a crime, isn't it? I have been to one funeral. I told you about that in my last post. It was my ex-sister-in-law who died. She was the reason I became a nurse and I really loved her a lot. Saw a lot of the ex's family members. Even saw the ex, but didn't get close enough to talk to him. LOL! Went to one wedding (more on that later) where there was NO social distancing and NO ONE wore a mask. But, thank the good Lord, I did not get the virus. I have been to Walmart once. While there I got a haircut, bought some bread and a can of hairspray. I wore my mask and everyone in the store (except one man and one teenage boy) had a mask on. And that is the only places I have been. It is a good thing I like to stay at home because I cannot imagine what people who like to gad about are going through. My sons have been here a few times. The grand kids have been here when I let them come. I talk outside in the yard with the neighbors, the mailman, the UPS dude and that sums up my social contacts since March.

Some of you may know that Harley got married. It was a tumultuous beginning of the year for her and her man but they went ahead and decided to get married. I mentioned that too in my last post. I did NOT help with most of the wedding plans. She has a pretty pushy mother-in-law who wanted to do a lot of it so I said let her. The wedding took place in his parents church in a little town about 10 minutes from here. It wasn't as big as she had hoped but it was nice. I walked her down the aisle. They had a reception/dinner after the ceremony and that was the end of that. She and Isaiah went to Colorado for a few day honeymoon and now both are back to work. I guess everything is okay. I don't hear a lot from her as she is working 12 hour shifts and they are the night ones. So if she is not at work she is asleep. I remember those shifts from my 25+ years of working nights at the hospital. The nursing home she is working in has several cases of Covid-19 so I do not encourage her to visit. To be honest, I forbid it.

Now for the bad news. On August 28 my precious 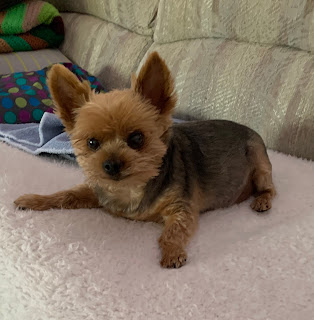 little Charlie died. We were at home minding our own business and having a good day. He had eaten normally, gone outside a bit, had normal bathroom habits and mostly a good day. He seemed a bit quieter than usual but I wasn't really concerned about him. That evening he was in his bed (which was at my feet) when I noticed he was sitting up and panting heavily. I was immediately alarmed and placed a call to the vet. My vet does not offer in town emergency services and I would have had to drive him to Wichita. I was NOT going to do that. So I called another vet and after he talked me through a few simple observations told me to meet him at the office IMMEDIATELY. Harley happened to be coming to my house and we set off. Sadly, little Charlie died in my arms just as we got to the parking lot of the vet. (It was about 15 minutes from my house). The vet thinks he had a heart attack. It was a muggy, hot day and he said that often takes little old doggies like Charlie. Needless to say, I was devastated. That little guy was the reason I got up every morning. This vet thought Charlie was probably older and sicker than the vet I was taking him to believed. But nevertheless, my heart was broken. I vowed right then and there to NEVER have another dog. It is just too damn hard to lose them. First Bailey, and now Charlie.
BUT, just five days later (yes, 5 days) the
rescue person I had gotten Charlie from reached out to me. She wanted to know if I was open to seeing a picture of a puppy. I was pretty damn sure I didn't want a puppy but I said, "sure, send me a picture." And that is how I fell in love with Teddy Magoo. He is a 20 month old Havanese puppy whose owner was needing to re-home him. She had paid a bit of money for him but was willing to GIVE HIM for free to a good home. She brought him for a visit and I knew almost instantly he would be the one who would heal my heart. And, boy, has he. He is not fully housebroken. But we are making great strides. He has not been neutered but that will be happening soon. He needs to be caught up with his vaccinations and that is coming too. Right now the vets are running behind because of Covid-19 so we might wait until after the holidays. His previous owner's reason for re-homing him was she had recently gotten a divorce and was needing to go back to work and Teddy (she called him Zeke) used the dog door to go out but wouldn't use it to come back in. She also simply didn't have the funds to have him neutered and vaccinated. He was starting to mark inside her house. I keep him with a belly band on when we are inside but I rarely see him try to mark. He does have accidents and the belly band helps with that. He is such a joy. Much more rambunctious than either of my previous Yorkies. He loves to play. He loves to run after 'anything' I throw and he brings it back. He loves to sit in the bay window and watch the world go by. He loves to walk on the leash. We have had a few adventures that I will write about in future posts.He doesn't like riding in the car. Yet! We are working on it. And he doesn't really like other people or other animals. That will have to change too. He barks more than the Yorkies did but that is a behavior I am working on too. I am smitten, once again.


So that is my life right now. I am happy the election is over. Now we just need to have a grown up President that will admit he has lost the race. I think things will be peaceful once we get Joe and Kamala rightfully installed in the White House. It has been exhausting. But none of the crap he has pulled has surprised me. I am sorry if he was your choice. I am not sorry that he is going to be gone. So much division caused by his hatred. It is time to move on.
Hope everyone of you is happy, healthy, and looking forward to this God-awful year to end. Looking forward to getting around to all of your blogs and seeing what all of you are doing.
Posted by Paula at 10:36 PM