Here is the Overview from Barnes and Nobel 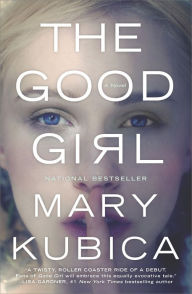 "I've been following her for the past few days. I know where she buys her groceries, where she works. I don't know the color of her eyes or what they look like when she's scared. But I will." One night, Mia Dennett enters a bar to meet her on-again, off-again boyfriend. But when he doesn't show, she unwisely leaves with an enigmatic stranger. At first Colin Thatcher seems like a safe one-night stand. But following Colin home will turn out to be the worst mistake of Mia's life. When Colin decides to hide Mia in a secluded cabin in rural Minnesota instead of delivering her to his employers, Mia's mother, Eve, and detective Gabe Hoffman will stop at nothing to find them. But no one could have predicted the emotional entanglements that eventually cause this family's world to shatter. An addictively suspenseful and tautly written thriller, The Good Girl is a propulsive debut that reveals how even in the perfect family, nothing is as it seems.


This is a book, like many of my books, that is on the reading list of a friend. The books she reads are usually ones that I like as well. And this time was not any different. This book was compared to Gone Girl in some of the reviews I read. I couldn't disagree more. But it was still a book I really liked.

The book takes place in Minnesota in the winter. I have been to Minnesota in the winter and it is cold. Like damn cold. So when the cold was being described here it wasn't hard for me to imagine. And the cabin reminded me much of the Colorado cabin Richard and I spent many days staying in when our boys were growing up. The basics of the book have been written many times over.

The ending of this book was a shocker!! I won't spoil it for you. But I do give it four stars **** and recommend it for your reading pleasure. This is a first novel by this author. I think with her type of writing there will be more good ones coming.